Are You Prepared to Save a Life? 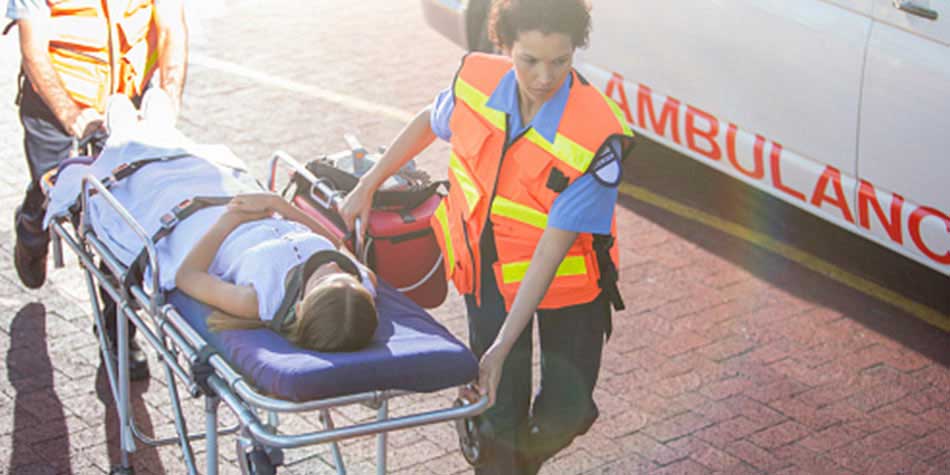 To learn more, visit the American College of Surgeons' Stop the Bleed website.

Hopefully, you'll never be in a situation where someone is suffering life-threatening bleeding. However, uncontrolled bleeding is the leading cause of preventable trauma-related death, so knowing what to do - and what not to do - in an emergency situation might just save a life.

If there is a lot of blood -or if the flow of blood is pulsating - it generally indicates an arterial injury, says Scott Bentz, MD, Emergency Department Medical Director, Presbyterian/St. Luke's Medical Center in Denver, Colorado.

"Arteries are under a lot more pressure than veins," Dr. Bentz explains. "If you cut a vein or a capillary (a tiny blood vessel), the blood oozes out. But with an arterial injury, the artery will pump out the blood."

In a serious bleeding incident, the victim may also be confused or even unconscious.

Here are the steps you should take if you are able to help in a bleeding emergency:

Before you do anything else, call for emergency help or tell someone else to call. After that, your job is to do what you can to stop the bleeding until the medical professionals arrive.

Slow or stop the bleeding

Once you identify the source of the bleeding, which may require removing the victim's clothing, put direct pressure on the wound itself, says Bentz. A sterile gauze pad would be ideal, but since most bystanders don't carry a first-aid kit, you can use a washcloth, paper towel or shirt - whatever is available and clean.

"If you have gloves, you can even use your finger or hand to push on the wound," adds Bentz. If the wound is deep, pack the cloth into the wound and then apply pressure. Use both hands if needed to stop the bleeding.

If the victim bleeds through the cloth on the wound, add another cloth on top of the first one rather than replacing it. Don't try to remove an object from the wound because it might be helping to prevent further bleeding. Your focus should be on doing what you can to slow the flow of blood - and leaving the rest to the medical professionals.

Once you've applied pressure, try to place the injury above the heart and let gravity help decrease the flow of blood. Likewise, if the victim gets lightheaded from bleeding, try to get the person to lie on the ground and elevate his or her legs.

"There's a lot of blood stored in reserve in the legs and putting the victim's head on the ground brings blood to the head to help keep the person conscious," says Bentz.

Apply a tourniquet as a last resort

You may have heard about the use of tourniquets in emergency situations, but it's important to know that they should be applied only by someone trained in their use and only as a last resort. In the case of someone who has lost a limb in an emergency, then a tourniquet can be a life-saving measure to help stem the blood loss.

However, the improper use of a tourniquet can also lead to the patient unnecessarily losing their arm or leg, so judicious use is necessary and only by people who have received training.

"A tourniquet is really a last resort," emphasizes Bentz. "With the vast majority of non-military wounds, you can stop bleeding with direct pressure."

Some people are more at risk of heavy bleeding

Medications and certain conditions, such as von Willebrand disease or hemophilia, can put some people at increased risk of serious bleeding. Aspirin, for example, prevents platelets from forming clots. And blood thinners, such as warfarin, affect clotting factors, slowing the body's ability to form a clot. Your body needs both platelets and clotting factors to create a clot.

"A lot of drugs affect one or the other," Bentz says. In fact, many people are on anticoagulant (anticlotting) drugs, such as Xarelto or Pradaxa, which can put a person more at risk for serious bleeding even from a minor wound.

"It's good to ask a person who's bleeding if they are on blood thinning medications or aspirin," Bentz says. "If you find out they are, be extra vigilant. The person will not form clots in a normal fashion. It will take a lot longer to stem the flow and they are more at risk for bleeding out."

Remember: In case of a bleeding emergency, call 911, apply direct pressure to the wound and elevate it until help arrives. Use a tourniquet only as a last resort.

Is the Air in Your Home Polluted?

October 23, 2018
Your home should make you healthier, not less. Put your pollution radar to the test and answer these four questions about your home's indoor ...
Previous Post

Protecting Your Health from Air Pollution

October 16, 2018
Research suggests that, even at safe levels, air pollutants can harm your health. A reduction in short-term exposure to particulate matter from...
Next Post
Back to blog home

Are you prepared to survive the wild?

Heart failure and heart rhythm: The link you need to know about