Cost: A Surprising Complication of Diabetes

Chances are you know someone with diabetes. And if you do, you know that daily tasks like blood sugar checks, insulin injections, and constant doctor's appointments are familiar costly chores of the illness.

But did you know that diabetes could be costing you, even if you aren't diabetic?

In fact, 62% of diabetes care is covered by taxpayers through government health insurance programs, such as Medicaid or Medicare, says the American Diabetes Association.

Diabetes cost the US $174 billion in 2007 and $245 billion in 2012, a 41% increase over 5 years. That means the cost of diabetes in the US rivals the gross domestic products of entire countries, like Pakistan. 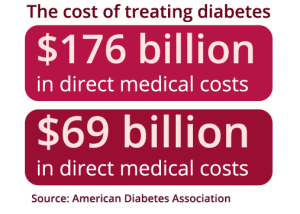 How many people have type 2 diabetes?

More than 29 million Americans have type 2 diabetes, according to the US Centers for Disease Control and Prevention (CDC).

And type 2 diabetes is growing among children. In fact, the prevalence of this diagnosis has risen 35% among young people ages of 10 to 17 between 2001 and 2009 alone.

What's behind the high cost of diabetes?

Hospital stays are the biggest direct cost of diabetes care. And that number doesn't include intangibles like:

How much does diabetes cost individuals with the illness?

About $7,900 per year, according to the American Diabetes Association. That's 2.3 times more than what you'd spend on medical expenses if you didn't have the illness. 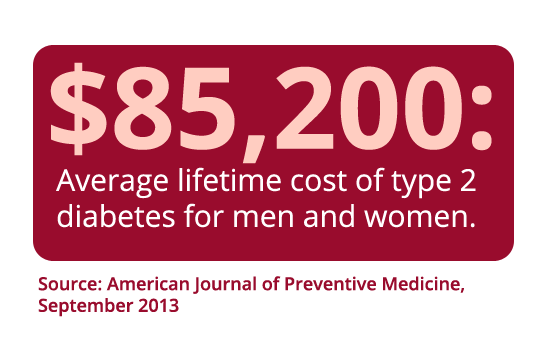 Think about what you could do with $85,000 over a lifetime if you didn't have type 2 diabetes.

Of this average lifetime cost, more than half ‹ 53% ‹ is spent on treating diabetic complications, according to a September 2013 article in the American Journal of Preventive Medicine.

Then, there are costs of the disease you can't count:

Diabetes is the 7th leading cause of death in the US with 73,831 people dying of diabetes or related complications each year, according to the CDC.

How much does preventing diabetes cost?

Type 2 diabetes is preventable. It often stems from a lack of physical exercise and an unhealthy diet.

And swapping out unhealthy foods with fruits, vegetables and whole grains may bring your grocery bill up a bit, but by far less than $7,900 a year.

Talk to a West Valley doctor today about how you can reduce your risk of type 2 diabetes.

When is the last time you took time out of a busy day to focus on yourself? Here are five self-care day ideas to help you slow down and find...

3 More Ways Your Technology Addiction May be Ruining Your Health

Why is the Flu So Bad This Year?

How to handle your grief during the holidays

4 Signs You're Pushing Your Student Athlete Too Far