Last Friday, I visited West Valley OBGYN for my 20-week ultrasound, which in some circles (like the ones I just made up) is known as the “big one.” It's the ultrasound where your baby actually looks like a baby for the first time. They measure the brain and organs and all those spindly little limbs. You get to see all four chambers of its nickel-sized heart beating in perfect synchronicity. And, yes, for those of you playing along at home ... you get to find out the gender.

Except that we didn't. Even I am a little surprised by our decision. Months ago, I was confident we'd find out. I pride myself on pragmatism and knowing the baby's gender in advance is certainly more practical. But then I got to thinking about how many true surprises we get in life ... well, good ones, anyway. And the answer is not many. This will add such a unique and joyful twist on what is already a pretty unique and joyful moment. My tearful husband will get to burst into the waiting room to announce, “It's a boy” or “It's a girl!” Won't that be sweet and special and old-fashioned in the best way possible?

But if I'm perfectly honest, that warm and fuzzy tableau isn't the whole reason we decided not to find out. It's not even the primary reason. Between you and me, the real reason is that society slowly, painfully beat the desire to know out of me. By asking incessantly at every possible opportunity. It's the No. 1 question when people learn I'm pregnant: “Is it a boy or a girl?” That's harmless enough, I guess. But when I say we're not finding out, people have some bizarre responses. They get angry and indignant. They threaten to pose as nurses and sneak into my ultrasound appointments. They ask if my doctor can just email them a screenshot of my child's genitals that's not a joke, more than one person has asked. Am I crazy, or is that super weird and inappropriate even in the context of pregnancy?

I know they're only teasing me. I do. But it's really started to weigh on my mind recently. Why is this such a big deal? It shouldn't matter, should it? The most common explanation I hear is that my friends and family are unable to buy my child gifts unless they know the gender. I don't understand the rationale here. It's a baby, it needs the traditional baby things. It doesn't suddenly not need a crib if it's a girl. And I'm sorry, but the color argument just doesn't hold water anymore. It's 2016. It's not going to hurt anyone if my tiny, amorphous son wears a pink onesie to the grocery store. 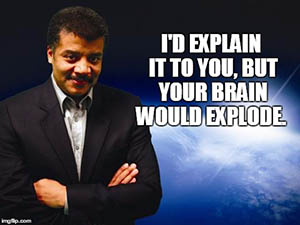 And then there's the nursery. Cam and I decided long ago on a space theme for our baby's room. We're both huge nerds about astronomy and Star Wars and Neil DeGrasse Tyson, so space seemed like a great gender-neutral theme. And you can find such cute stuff online! Little rockets and constellations and solar-system mobiles. But three different people now have commented that our nursery will be inappropriate for a girl. Seriously? You do know we have an elementary school in Meridian named after a female astronaut, right?

I know to you it probably seems like I'm making a mountain out of a mole hill. Maybe I am. But I remember being that little girl the one who hated pink and despised hair ribbons, but loved Legos and Super Mario Kart. Now I'm an adult woman who loves beer and Fantasy Football (league champ, 2014) as much as she loves makeup and bad rom-coms. My husband wields a crochet hook and baseball bat with equal efficiency. And while society seems perfectly okay with both of us, they seem less okay with my kid sleeping in a room with rocket ships and wearing all colors of the rainbow.

So, I've decided that for four more months, anyway my child just gets to be themselves. No baby dolls or footballs or Barbies or dump trucks. I have control over that much. But sorry, tiny human, my protective force field weakens considerably outside the womb. Enjoy your anonymity while it lasts.

Millennials’ Odds for Depression Rise with Social Media Use

Take the next step toward relief from foot pain

The Latest on Skin Cancer

Can a walk in the woods really make you happier?