Why You Should Learn CPR

You've seen it on TV: Somebody is suddenly unconscious on the ground and not breathing. Someone else rushes in to help, kneels down and starts alternately breathing into the person's mouth and pumping the person's chest.

But what happens when you find yourself in a similar emergency situation in real life, and no one knows what to do?

The life-saving attempts you've seen on TV is called CPR, or Cardiopulmonary Resuscitation. It literally means heart-lung revival. This procedure is used to save someone's life if his breathing or heartbeat has stopped, according to the National Institutes of Health.

According to the National Institutes of Health, people may need CPR after:

The goal is to take over the heart and lungs' job. You have to keep blood flowing and prevent brain damage until emergency responders arrive. Knowing how to do that is key, and something everyone should learn to do. 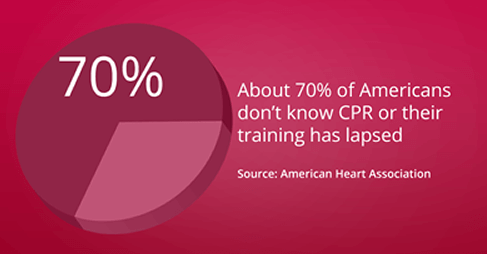 It's scary that most people don't know CPR, especially since 88% of cardiac arrests happen at home not in an emergency department where qualified medical experts are able to swoop in to save the victim.

With more than 4 out of 5 cardiac arrests happening in the home, learning CPR means you could very likely save someone very close to you your mother, husband or neighbor, for example. And the sooner you're able to act, the more likely you'll be able to save your loved one.

This is important because only 8% of people who go into cardiac arrest outside of a hospital survive, according to the American Heart Association. But CPR can change that.

But first: If you're in an emergency situation, call 9-1-1. Always set the wheels in motion for an emergency responder before trying to tackle the situation yourself. Then, while you wait for the medical team to show up, use your CPR training to manually keep the victim's heart beating. 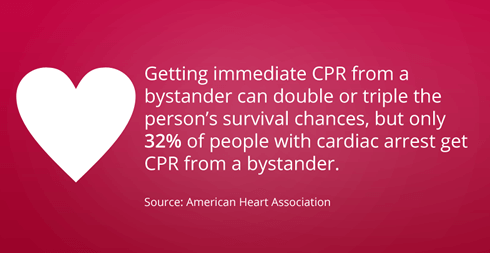 A study published in the April 2014 issue of the Journal of the American Heart Association confirms that even if you're not prepared to do CPR when an emergency arises, the 9-1-1 dispatcher can walk you through what to do. Survival rates increased by 4% from 8% to 12% when dispatchers instructed bystanders on how to do CPR, the researchers reported.

If you've ever worked around children or been a lifeguard, you probably had to obtain CPR certification as a job requirement. You may remember some of what you learned in the class, but it never hurts to take a refresher course, especially if you are caring for aging parents or someone with a heart condition.

In a CPR class, you'll learn the proper steps for performing the procedure. But here's an overview to help you prepare for CPR, according to the Red Cross:

First, check the person's airways to see if they're breathing, and tilt the head back to open the airway as much as possible.

Next, plug the person's nose and give 2 rescue breaths, making sure your mouth forms a tight seal over the victim's in order to push as much air into the lungs as possible. Watch for the person's chest to rise as you do this, to make sure your breaths are going in.

Repeat. You may get tired after continuing this cycle a few times, but don't stop until the emergency responders arrive or if the situation somehow becomes dangerous to you as well.

As overwhelming as the situation might be, try to stay calm. And keep the ultimate goal in mind: To save a person's life. Learn more about West Valley's Emergency Services.

Working from home with kids – staying sane and productive

Impingement Could Be to Blame for Shoulder Pain