You've probably seen the commercials for arthritis medication on TV: An older woman stands by while her energetic grandchildren play outside.

The woman looks sad, and a voiceover tells you it's because she wishes she could join them, but she can't she has arthritis.

By the end of the commercial she's out there running around with her grandkids and everyone is smiling and laughing.

But what about those kids? They're running around now, but are they destined to get arthritis, too? 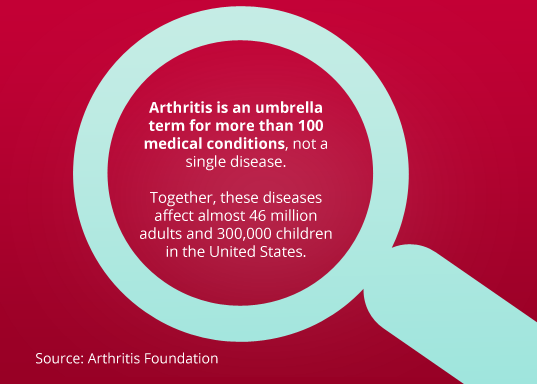 The answer is more complicated than TV commercials let on. Whether or not the children and grandchildren are at risk for developing arthritis has a lot to do with what kind of arthritis the older relatives have.

Most, if not all, of the many different forms of arthritis have genetic components. But each type of arthritis has its own set of genes and level of heredity, according to the American College of Rheumatology.

This means that the genes responsible for different kinds of arthritis affect two things:

Rheumatoid arthritis which affects 1% of the entire world population including about 1.3 million Americans is linked to a gene called HLA-DR4. This link is especially strong among people of European ancestry. Up to 70% of all rheumatoid arthritis patients with European ancestry are carriers of this gene, compared with 30% in the general populationSource: Heredity and Arthritis.

But genes alone are not the only factor.

Many types of arthritis are multifactorial diseases, says the American College of Rheumatology. This means that arthritis is caused by the interaction between your genes and other factors, like age, gender, physical activity and nutrition. Osteoarthritis one of the most common forms of arthritis is one example.

There are a number of potential triggers for arthritis that are unrelated to a person's genetic makeup. 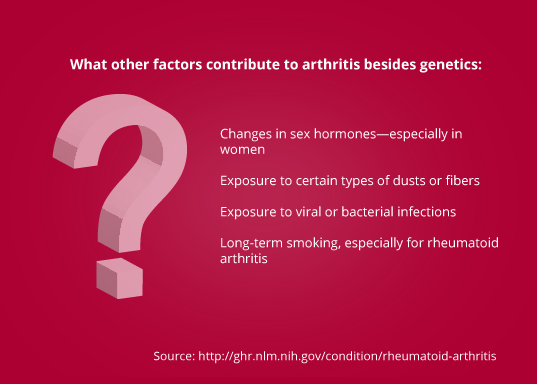 Is Arthritis a Genetic Autoimmune Disease?

However, not all types of arthritis are autoimmune diseases.

The most common type of arthritis, osteoarthritis, is not an autoimmune disease. But, as the American College of Rheumatology points out, genetics is still an important factor in its development.

The bottom line is that your genes do play a role in whether you will develop arthritis, but other factors also matter.

Talk to your doctor about who in your family has arthritis and find out what steps you can take to prevent arthritis or alleviate its symptoms.

Use our Find a Doctor tool to find a West Valley orthopedic specialist today.

August 3, 2017
Learn about scleroderma — a disease affecting the body’s connective tissue — from one woman’s first-hand account of living with the...
Next Post
Back to blog home

Can this drink increase your risk of stroke?

How having a pet can help your mental health

6 Things to Know about Depression in Elderly Parents