It's Friday evening: date night. Instead of going out, you and your spouse decide to stay in and watch that black hole of films called Netflix.

First up is an episode of House of Cards: Season One. Six hours later, it's 3 am and you're only halfway through the season. But you're hooked.

This is binge watching, where you embark on a marathon of TV viewing instead of focusing on intimacy, fun, and talking with your spouse.

Not only is it a time-suck, but it can be a really bad influence.

“It doesn't mean that everybody is impacted by that,” she adds. “But there are some hidden messages attached to shows produced today that can really undermine relationships.”

Ronya explains 4 ways watching Netflix ruins marriages and how to fix it.

Let's be clear. The occasional date night watching a movie with your partner can be very romantic. But the main word there is occasional.

“Like anything, if you do it in excess it causes problems. In this case, it creates communication barriers for couples,” says Ronya.

“When you watch a lot of Netflix or TV in general, it's you and your significant other sitting on the couch together, and you're no longer talking,” she says. “Your communication is changing ‹ disappearing in fact ‹ because you're so wrapped up in watching the show.”

Netflix and TV shows are good for glamorizing relationships and making it all look so effortless. But that's not reality.

“For those of us in long-term relationships, we know they're a lot of work and they're not always glamorous,” Ronya admits. “You don't come home to candlelight dinner and roses.” 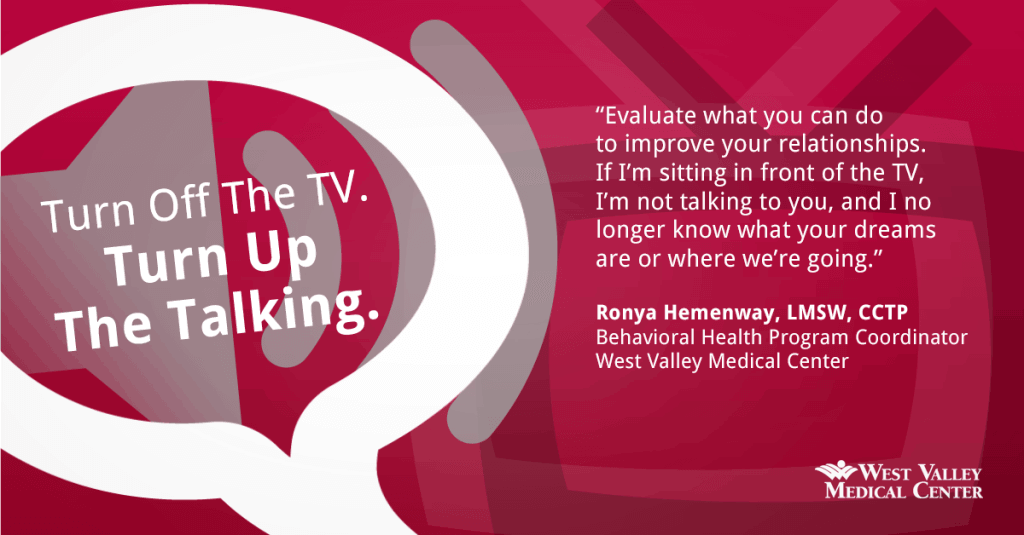 “At times, there is the perception that these shows are what romance is all about and what a relationship should look like,” she says.

In fact, the more a person buys into TV romance, the less likely she is to be committed to her own relationship, reports a September 2012 study in the research journal Mass Communication and Society.

“On TV, we don't see what a true relationship looks like. It takes communication skills, compromising ‹ people don't recognize just how much work it really is.”

“Some of the shows out there portray that it's really easy to exit the relationship,” Ronya says. “If I'm not happy, then I'll just go out and have an affair, or maybe it's just time that I leave the relationship.”

These unrealistic portrayals of relationships make partners outside of a relationship seem more attractive, says the Mass Communication and Society study.

In real life, ending relationships can be messy, tortuous, and drawn out. And they don't always have these neat, happy endings. So, to avoid disillusionment once again, be selective about what you immerse yourselves in as a couple.

“Evaluate the type of programming that you're watching,” Ronya cautions. “A lot of movies for entertainment purposes have messages attached to them about how we treat our significant other: that adultery is acceptable, that everybody is cheating on their spouses, and that it is just a thing we do.”

4. It Promotes Violence And Abuse.

Remember how parents were warned about the dangers of violent video games because they can cause violent behavior in children? This exposure causes the brain to be desensitized to violence, says a March 2011 study in the Journal of Experimental Social Psychology.

Similar rules apply to violence in shows and the effect it can have on your relationship.

“A lot of shows out there have violence, and a lot of lying and deception,” she says. “As an individual, we have to evaluate the kinds of films we watch because over time, our belief systems could start to change.”

Just like we need to monitor our food intake to maintain our health, a careful media diet is essential for good emotional and mental health.

If you want a happy, healthy relationship, then do something ‹ literally ‹ to keep it that way.

“It's important to do activities that you both enjoy,” Ronya suggests. “And anything that can be done outside when the weather is nice is beneficial because we're getting sunlight and Vitamin D.”

In addition to getting active, Ronya recommends that you as a couple get honest about how much Netflix you're watching and how many hours you're actually wasting in front of the television.

“Truthfully evaluate what you are willing to do to reduce that amount of time and even cut it in half,” she says.

Ronya suggests choosing alternative activities that promote engagement, interaction, and most of all, communication.

“When we stop communicating as a couple, that means we start drifting apart,” she warns.

Shock therapy isn't what you think it is

Why is the Flu So Bad This Year?

Should you wash your legs? Plus 6 other showering tips