You've probably heard about how human papillomavirus (HPV) can lead to cervical cancer in women. That said, it might make sense that girls are getting the HPV vaccine. On the other hand, maybe you've also heard rumors that the HPV vaccine is dangerous, too.

So, why should guys even consider getting it?

With that kind of uncertainty, it's no wonder that some parents still have doubts about whether the risks of the HPV vaccine outweigh the benefits for boys.

Here's the truth behind 6 myths about the HPV vaccine for boys.

HPV is not just a girl problem. Infection can lead to many different types of cancer in both men and women, including mouth and throat cancer, explains the Centers for Disease Control and Prevention (CDC). 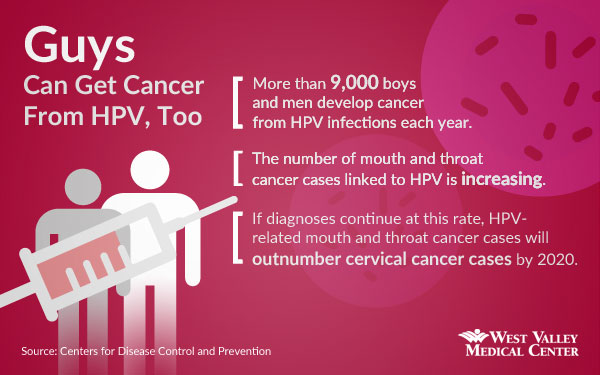 The purpose of the HPV vaccine is to protect people from both the human papillomavirus and the diseases including several different types of cancer that it can lead to. This is true regardless of whether that person is a boy or a girl.

And because HPV is primarily spread through sexual activity, boys who receive the vaccine might even be preventing the spread of the virus in the future, the CDC suggests.

Um, yes, it is. HPV is so widespread that 1 in 4 people in the US is currently infected, the CDC reports.

Most people with HPV don't know they're infected because they don't have noticeable symptoms, says the American Academy of Pediatrics (AAP). There is no cure for the infection.

And the virus is still responsible for 26,000 new cancer diagnoses every year. But the majority of these cases are preventable with vaccination.

Almost 80 million doses of the HPV vaccine have been given out in the past decade, reports the CDC. While some mild side effects can happen afterward including temporary redness or headaches the vaccine is considered safe for most people, says the AAP.

With the HPV vaccine Gardasil, 92% of side effects were classified as non-serious, reports the CDC. The most common side effects pain in the injection site, redness or swelling, and headaches are usually short-term and disappear on their own, says the AAP.

And if safety is the concern, consider this: Developing cancer isn't safe, either.

Myth #5: It's Okay For Guys To Wait To Get Vaccinated As Long As They Aren't Sexually Active.

Boys should get vaccinated against HPV when they're 11 or 12 years old, according to Centers for Disease Control and Prevention recommendations. Yes, one of the reasons for doing this is to protect them before they are potentially exposed to the virus during sex.

But there's another equally important reason for boys to get vaccinated at that age: Their bodies create a stronger immune response around that age, too.

Myth #6: Once A Child Becomes A Teen, It's Too Late For Him To Receive The HPV Vaccine.

Vaccination against HPV usually requires getting three shots over the course of six months, says the CDC. But fortunately, boys who were not vaccinated at 11 or 12 aren't out of luck.

Not only can guys between the ages of 13 and 21 receive vaccinations to catch up on their HPV protection, in some cases, men might even want to look into getting vaccinated up to age 26, says the American Academy of Pediatrics.

If your son hasn't received his HPV vaccination, talk to a physician at West Valley to see what his options are.

Talk to A Doctor

How Do You Handle a Diabetic Coma?

How Prostatitis and Other Prostate Problems Can Ruin Your Sex Life

Total Solar Eclipse: How to See it Safely