Is It Okay To Go Swimming On Your Period?

Did you ever want to get out of swimming in high school gym class? If so, you might have used the no-fail excuse, “I have my period,” which probably worked better if you had a male gym teacher.

But now that you're out of high school and you actually want to go for a swim, that “period story” might be coming back to haunt you. You might be wondering: Is it okay to go swimming on your period?

Well, here it is the myths and facts of getting in the waves while riding the crimson wave.

Myth: Swimming On Your Period Is Dangerous.

Fact: You CAN swim on your period, as long as you're healthy. And, of course, you know how to swim. Read on for more.

This is a common misconception, but it's rooted in truth. Many women notice that their periods don't seem quite as, um, “flowy” when they're in the water but it's not because their periods stopped.

BetterThanSexEd/California, a website run by the Department of Public Health (CDPH), explains that while you're still bleeding, water pressure might stop you from bleeding outside of your vagina. But your flow will resume as usual when you exit the water.

Fact: Um, you can, and you should.

In fact, if you have a heavy flow, a tampon might very well be your new best friend. Pads? Not so much. According to the US Department of Health and Human Services, pads soak up a lot of water and get bulky. They could then leak once you get out of the water.

The CDPH recommends using tampons while swimming to stay sanitary. However, while they are meant to be absorbent, you can get uncomfortable if your tampon absorbs a lot of water. If you're going to be swimming for a while, be sure to change your tampon more often.

Just make sure to tuck in the string, so you don't have a super-embarrassing moment.

Myth: Swimming On Your Period Is Unhealthy.

Fact: Actually, it's just the opposite.

Not only is swimming while on your period safe, according to the CDPH, it's actually a good idea if you're looking to ease menstrual cramps.

Swimming is a great form of exercise, and exercise helps you make endorphins. According to Merck Manuals, endorphins reduce pain and give you a sense of well-being. And ladies, who doesn't want less pain and increased well-being during this time of the month?

Same goes for that lovely thing called premenstrual syndrome (PMS). Yes, cookies and movie marathons are great ways to deal with PMS symptoms, but the American College of Obstetricians and Gynecologists recommends doing exercises like swimming to feel better.

Myth: Swimming In Oceans On Your Period Is Dangerous, Since Sharks Love Blood.

Fact: They are just not that into you.

This is maybe one of the most entertaining myths floating around (pun intended). While it's true that sharks love themselves some blood, your period probably won't lure them toward you. According to the Divers Alert Network (DAN), there is no evidence supporting the claim that your period is shark-bait.

When you menstruate, you don't actually lose much blood. And the blood you do lose is actually a combination of blood, mucus, secretions from inside the uterus, and more, explains the DAN. There's no reason to believe this combo attracts them more than fresh blood the kind they can easily get eating smaller fish.

Plus, Outside Magazine explains that sharks are attracted to amino acids in blood, and acids diffuse when they hit the water. 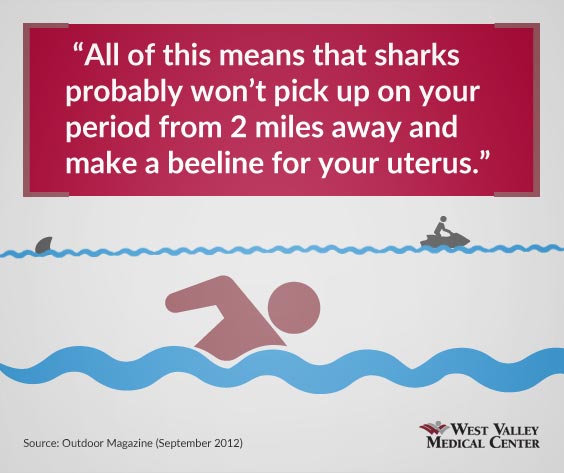 What to know about the updated stroke treatment guidelines

In Her Own Words: Living with Endometriosis