Chances are, you've probably heard of the winter blues. You may even have felt them yourself at some point.

But did you know that there is a point when those blues become more than a mood swing? Unexplained feelings of sadness, tiredness, and even weight gain may be a sign of a condition called seasonal affective disorder, or SAD, says the National Institutes of Health.

SAD is a form of depression that hits 500,000 people in the US each year, according to Mental Health America.

This condition is something to take seriously because it can trigger severe depressive symptoms including thoughts of suicide if left untreated. In other words, it's worth getting help instead of just waiting for the warmer weather to return.

Here are 5 myths and facts about SAD:

1) Myth: Seasonal affective disorder only happens in the winter.

It's true that the peak SAD season is between December and February.

But SAD symptoms can start as early as September and end as late as April, says Mental Health America (MHA).

There are even people who suffer from SAD specifically in the summer months. While winter SAD is triggered by a decrease in sunlight, the opposite is true for summer SAD. Too much heat and sunlight can lead some people to feel depressed in the warmer months.

2 ) Fact: Getting more vitamin D can help boost your mood.

Your body produces its own vitamin D when it is exposed to the sun, explains the National Institutes of Health (NIH).

The link between depression and vitamin D deficiency caused by decreased sun exposure goes back 2,000 years, according to an April 2014 article in Nutrients. The authors reviewed past studies on this relationship and found that taking supplemental vitamin D can in fact help relieve depression.

The NIH recommends adults get 15 micrograms of vitamin D each day.

3) Myth: Everyone is at equal risk of having seasonal affective disorder.

Actually, women get SAD much more frequently than men. 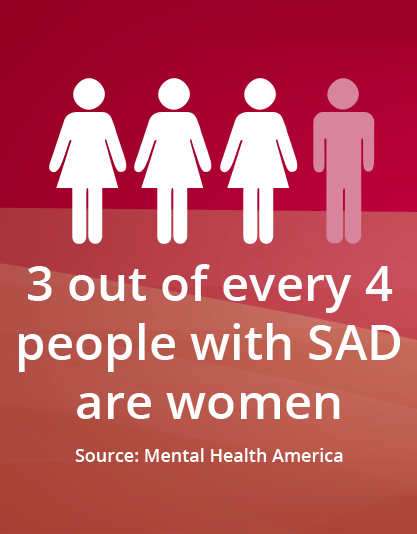 Age matters, too. In general, kids aren't as likely have SAD. The average age at which people first develop SAD ranges from 18 to 30 years old, according to MHA. Notice the words “first develop.” That means older people can continue to suffer from SAD as well.

Location matters as well. People with SAD can be found in both the northern and southern hemispheres of the world. But the MHA explains that the closer you live to the equator, the less likely you are to have SAD. This may be because of the lack of seasonal variation in areas close to the equator.

And family history can play a role in your risk level also. Psychology Today says that more than half of people with SAD report having a close relative who suffers from severe depression. And over a third of SAD sufferers have a relative who abused alcohol.

Light therapy, also called bright light therapy, is an easy and effective way to treat SAD. The purpose of light therapy is to simulate natural sunlight exposure that you simply don't get during the winter months.

Patients who were exposed to certain wavelengths of bright light were less tired and reported both better health and improved moods, according to a 2011 study in Depression Research and Treatment.

An at-home light therapy kit can cost somewhere around $200, a 2012 article in the same journal reported. But that kit can last up to five years. In comparison, prescription antidepressants for those five years can add up to around $600, depending on the specific medication and whether it's covered by insurance.

Of course, you'll want to talk to your doctor first about which treatment is best for you first.

5) Fact: Your expectations can influence how effective light therapy is.

It can be tough to keep a positive mindset about treatment when you're dealing with depression. But doing so may actually relieve your SAD symptoms by increasing how well light therapy works, especially for women, according to a September 2014 study in the Journal of Affective Disorders.

Remember that recovery takes both time and effort.

If you think you're at risk for seasonal affective disorder, a West Valley doctor can help you come up with a treatment plan.

How Do You Handle a Diabetic Coma?

Impingement Could Be to Blame for Shoulder Pain

6 Things You Should Never Do With Fireworks